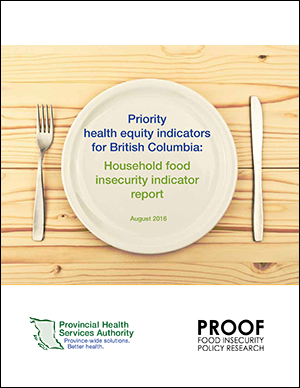 TORONTO, August 31, 2016 — Almost half a million British Columbians experienced some level of household food insecurity in 2011-2012, according to a new report from PROOF, a research group based at the University of Toronto.

Drawing on data from Statistic Canada’s Canadian Community Health Survey, the report finds over one in ten B.C. households struggling to put food on the table in 2011-12. Families with children under the age of 18 were at an even greater risk of food insecurity, with one in six B.C. children living in a food insecure household.

Click here to read the rest of the story and full report!

There has been a flurry of media coverage about our Gleaning Abundance Program, we hope this gets the word about about this fabulous program! Check out this article and TV interview we did recently. For more information about the program, check out GAP’s website.